I call this one Gardener with Rake (#20138) to avoid confusion with the that actually has hay. But for some reason there are collectors out there who refer to this Smurf as Haymaker or Farmer. Not sure why but they do.

The Gardener with Rake can be found wearing a straw hat, dark green apron, white trousers, dark brown shoes, while holding a rake. The rake is a loose removable accessory. As the rake is a removable accessory it is possible to find it with different coloured rakes. I don’t think however they were actually sold like this by Schleich or Wallace Berrie. Nice to add to your collection but not quite correct!

Schleich sold Gardener with Rake between 1983 to 2000 then again in 2011 and 2013. The Schleich mould is made out of blue pvc material and is painted with lighter colours. In the beginning the straw hat was more of a beige colour and this was later changed to a yellow, possibly around 1991. This would have been around the time that they removed the W in front of Germany (due to the reunification of Germany) and added the CE to the markings.

However when Gardener with Rake was given away with the French magazine Je Collectionne les Schtroumpfs in 2004 it had a darker beige straw hat and was made out of China. 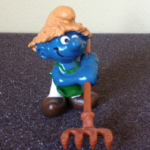 The Gardener with the Rake is considered one of a few made in Hong Kong from 1982. It was also around 1982 that BP Australia stopped selling Smurfs.  So the smurfs being produced out of Hong Kong were mainly for the US market. This explains why you can find the Gardener with Rake with three different Hong Kong markings.

Like a lot to Smurfs made and painted out of Hong Kong, the figurine is made out of white pvc material and is painted with darker colours.

In 2011, Schleich released the Decade Display Boxes. Gardener with Rake was included in the 1980 to 1989 Decade Display Box. I recall at the time, that I took all of smurfs out of the display box as I was excited to find that they had new markings. Now looking back I wish I left them in their display boxes. How was I to know that two years later they would re-release the Smurfs individually?

But that’s how it goes when you collect something……

Card Player Smurf – is it a promotional or normal regular Smurf? Some say it is, some say it’s not and others like me say it is both. The Card Player Smurf was first shown in 1980 Schleich catalogue but was actually available before this. The card playing Smurf holds his cards in his left hand, while he covers his right hand over his mouth. We can also see that he has card tucked into the top of his white trousers and has one eye open peeping at his cards.

The Card Player Smurf was first produced by Schleich in 1978, possibly as a promotional Smurf for ASS. Card Player holding card with ASS symbol on card. It was also produced without the ASS emblem and has the markings W.Germany Schleich S © 78 Peyo under its feet.  On some of these early ones, the colour of the heart printed on the card can vary from light pink to red. Also possible to find with overpainted hearts on card or a completely blank card.

The Card Player was also produced out of Hong Kong. It was sold by BP Australia, BP New Zealand and Wallace Berrie for the US market. The Hong Kong version shows us the ASS emblem on the card but does not include the word ASS on the card. Not sure why they did this but the year marking on the Hong Kong version is 1978 and not 1980.

The Card Player was also used extensively on triangle pedestals, music boxes and podiums with cards. Both the European and Hong Kong figurines were used.

The ASS Card Player was one of the first promotional Smurfs I collected. This was probably due to its price being so reasonable compared to many of the other promo’s out there. They sure must have made a lot of these, as they are still pretty easy to find today. It also has a cheeky disposition that is hard not to like.

Ass Alterburger (ASS stands for Alterburger und Stralsunder Spielkartenfabrik) is a German card playing company. They also make jigsaw puzzles and other board games. In the late 1970s the company were making a lot of items featuring the Smurfs. Some of these items included photographs of Smurfs that at the time were being made by both Bully and Schleich. Sometimes the Card Player Smurf was also sold with a deck of cards.

Today I experienced my first book fair book. With no expectations in mind, I offered to chauffeur drive my mother down to Yarragon with her quest to attend their annual book fair. It was a dreary cold Melbourne’s day so it was perfect for this kind of excursion. Until now I had no idea there were so many bookworms out there. 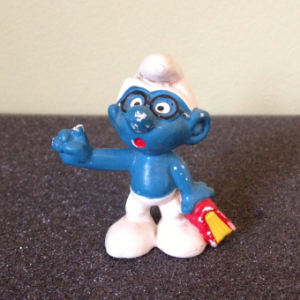 The Bookworm Smurf (#20094) was first produced by Bully in 1978. Wearing his customary white trousers and hat while holding onto a red book with yellow pages. The smurf is also wearing glasses, so more than likely it is loosely based on Brainy Smurf. Sometimes the eyes are painted white all the way to the glasses.

When Schleich changed the marking around 1984 they blocked the Bully mark and added Schleich and the year 1977 onto the back.  I don’t think Schleich made any other changes to the figurine. Schleich continued to sell Bookworm until 1986.

Schleich reproduced Bookworm between the years 1992 to 2000. During this time they blocked out the West in front of the Germany marking and added in a small CE to the back. Again it appears no changes were made to the figurine.

After this removed the markings from the back of the smurf to under the feet. They also produced two versions out of China.

It wasn’t until 1983 when a Bookworm was produced out of Hong Kong for Wallace Berrie. So it was highly likely Bookworm was never sold by BP Australia. However it is interesting to note that the version made out of Hong Kong  must have produced its own mould as the year marking on this is 1983 not 1977 like the Schleich made one.

So what is a Bookworm?

Depending who you ask, the term Bookworm can have different meanings. I always thought it meant someone who enjoys reading. But I have also discovered it is the general name for any insect that is said to bore through books. If that is the case then the township of Yarragon has a plague of bookworms to deal with this weekend during their book fair.

When I started collecting smurfs, I first came across the Super Smurf Boxer without his punching bag. I had no idea that it was in fact a Super Smurf. Looking back this wasn’t surprising considering how many times you see this Boxer without his punching bag being sold by sellers who either don’t know this was a Super Smurf or who knew it and thought that they could get away with it.  Same mould but different paint colours! 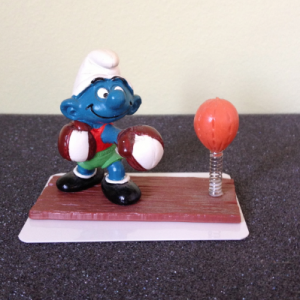 The Super Smurf Boxer was first released in 1980 by Schleich. It can be found wearing a red singlet, white socks, green shorts and brown & white boxing gloves with black shoes. The accessory is a spring mounted punching bag on a brown wood like rectangle plastic base. Schleich continued to sell Boxer through to 1986, with very little changes made. Sometimes you find variances with the punching bag but very little differences with the figurine.

It also appears that the Super Smurf Boxer was also used for Schleich’s triangle pedestals, which could be another reason these smurfs can be found without their punching bags.

The regular Boxer was first released in 1993. It can be found wearing a yellow singlet and socks, green shorts and red & white boxing gloves with light brown shoes. Schleich sold the regular smurf from 1993 to 2000. So at no time were both smurfs sold by Schleich.

The regular Boxer was only ever made out of Germany. But as the regular Boxer was produced around the same time as German’s reunification it can be found with W.Germany and Germany markings. A small thing for some, but for others a variation worth looking out for.

If you are lucky enough to have more than one Boxer smurf in your collection, you may want to consider displaying them so they face each other. This will give the impression they are boxing each other.